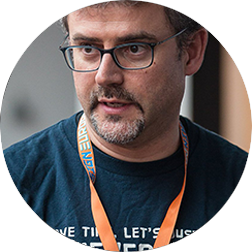 Alberto Brandolini can model every business domain, given enough space, a paper roll and an unlimited source of colored sticky notes (with a larger stock of orange ones). His contributions to the community include EventStorming, Model Storming and, more notably, the Bullshit Asymmetry Principle.

Alberto Brandolini is an IT Professional that gets bored doing things in the same old way. This led him into unexplored areas of Domain-Driven Design, Lean and Agile Software Development, learning and change management, where he likes to bring apparent chaotic fuzziness and a comic-like visual touch. An active consultant in software product development, he also runs his company Avanscoperta.

He’s frequently invited as a speaker in many conferences in Italy (where he’s based) and around Europe.

EventStorming is a workshop format that promotes collaboration between different disciplines in order to sove business problems in the most effective way. In this two day format we’ll experience the different formats, working around real business problems. We’ll take into account the different perspectives (including the facilitator) in a process that spans large scale discovery, to leverage collaborative design. We’ll experience the how, and we’ll discuss the why. Read more...

We’re all developers, but we’re not doing the same job. The line connecting a problem to its solution is relatively straight in some organizations and incredibly convoluted in some others.

Processes, Software architectures and Organization are not separate concerns, neither are they orthogonal. Pretending to fix one thing without touching others is a losing battle.

Experience the dynamics of a Big Picture EventStorming by modeling a real-world complexity system, team vs team.

It will be messy, loud, chaotic and entertaining. And addictive too!

UX person in love with DDD

Ask Me About Dojos